W is for Wolf: Storytime Plan

Talk: Mention that wolves are (mostly) nocturnal and are carnivores. Ask if these are new words to group. Define, ask about other creatures that are carnivores or nocturnal--talk about carnivore vs omnivore vs herbivore, nocturnal vs diurnal; then do below rhyme: 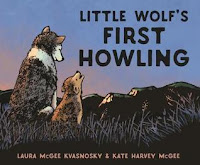 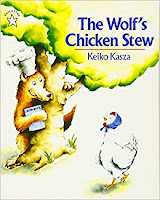 Action Rhyme: "Two Little Timberwolves" [Variation on "Two Little Blackbirds". Talk about how plural is "wolves," not "wolfs"--say both slowly, ask kids to try to hear the difference. A timber wolf is a different name for a gray wolf]


Song:  Dance, Freeze, Melt by The Learning Groove from their album Rockin' Red

Book: Let's Play in the Forest While the Wolf is Not Around by Claudia Rueda 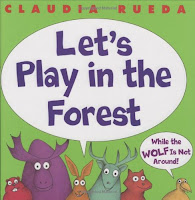 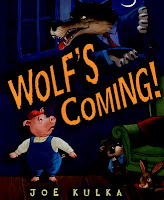 Action Song w/Magnet Board [seated]: "Two Timberwolves Went Out to Play" (inspired by Mel's Desk) [Talk about how plural is "wolves," not "wolfs"--say both, ask kids to try to hear the difference. A timber wolf is a different name for a gray wolf]

Two timberwolves went out to play

Action Song [standing]: "Wolf Pokey"
You put your claws in, you put your claws out, etc.
That's what it's all about--aaaaooooo! [wolf howl ends every verse]
Repeat with right paw [foot], left paw, tail, and fangs ["Grrr" every time you put your fangs in or out]

If time, recorded song with manipulative ("Beanbag Song" or similar)

Before Closing Song: Review new words we learned today: nocturnal ("Who remembers what it means?"); carnivore.

Closing Song: Laurie Berkner's "These Are My Glasses" a cappella. "Today, everything we find in our book will begin with W." Possibles before opening to kids for suggestions: wet warthog! Wicked witch! Wild wildebeest! (woodpecker, weasel, whale)